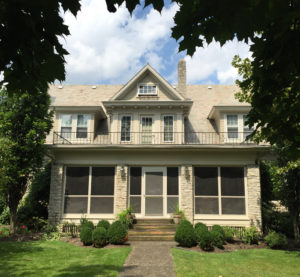 More than 175 years ago, this home was refuge for the poor and sick. Known as the Franklin County Poor House, it sat atop Grandview Avenue overlooking farmland and in the distance Franklinton. When the river would flood, the homeless couldn’t get there, so the county sold it to private ownership.

The home has 22-inch-thick stone walls and unused gas sconces in some of the rooms. The foundation was built on huge sections of tree trunk, it’s bark still visible in the basement. 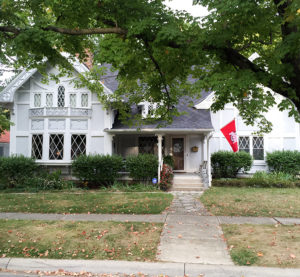 This unique “Rustic Cottage” was purchased by the current owners, Adam and Helen Miller in March 2014 and has the distinction of being the only home in the Grandview Heights – Marble Cliff area on the National Register of Historic Places. The home was designed by prominent Columbus architect, Frank Packard for J.E. Miller, an executive of the Pittsburg, Cincinnati, Chicago, and St. Louis Railroad. The home was deemed significant for its distinctive, eclectic architectural styling and detailing, which combines elements of the Stick and Gothic Revival Styles and is described as “Carpenter Gothic.” The home was completed in 1895 and consisted of five large rooms on the first floor, and five bedrooms on the second floor. The home originally had no indoor plumbing and was heated by fireplaces.

The home was purchased by the Myers family in 1953 who remodeled the cottage extensively to accommodate their family including the addition of a large family room in the rear. Later homeowners continued the renovations which include the replacement of plaster on the entire second floor with drywall, replacement of plumbing, heating and cooling systems, restoration of hardwood flooring, and repainting of the exterior of the home. Since moving in a little over a year ago, the current homeowners have restored the fireplace mantels in the lower level of the home. 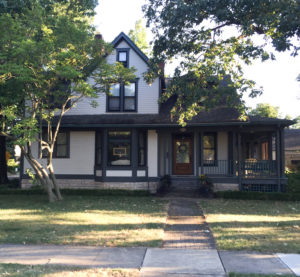 Constructed in 1903, the land for this residence was purchased and construction began by Frank Butterworth, furrier and principal in Henry Butterworth & Sons Furriers located at 1981/2 N. High Street in Columbus. This lovely frame home originally contained 10 rooms, and is a mélange of architectural styles.

After a few ownership changes, the Dewey family moved in to the property in 1953 and made some alterations to the home including the addition of a second floor bathroom, altering the back roofline. Additionally, the original back porch was enclosed to improve the kitchen area and the front porch was removed, as it was in great disrepair. Sadly, in 1966 there was a house fire which caused extensive damage to the sunporch area. The damage to the sunrooms on the first and second floors necessitated replacement of the original windows and removal of the additional front door. These sunrooms became what is now the first floor sitting room and second floor bedroom.

The current owners, Bryan and Carol Davis purchased the home in 1992 and made some wonderful alterations to the home including the large wraparound porch to the west side of the home. Additionally, the owners reconverted the sunporch and living room fireplaces into a functional see-through gas fireplace while preserving the original tiling. Other original features include the double staircase, one from the foyer to the upstairs, and one from the kitchen to the upstairs, the beautiful oak woodwork, and the front door. In 2000, the Davis’ added a mudroom and ½ bathroom off of the kitchen. More recently, two upstairs bathrooms were remodeled this year. The original landing at the top of the stairs has also been expanded to be a full hallway which allows better access to all four bedrooms on the second floor, as well as a walk-in closet for the master bedroom.

The large metal container used to catch rain water for the home is still in place in the attic. It is a reminder of our past – of the daily challenges of living taking place so long ago, and of the treasures we behold in one of Grandview’s finest historic homes. 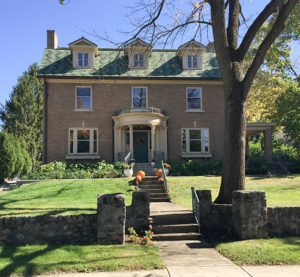 This 1926 Marble Cliff home was extensively renovated, for the first time in almost 40 years, in 2011 and 2012. Improvements include an overhaul of the 1970s-style kitchen, removal of a four-story elevator, and extensive landscaping work. Much of the house was also restored to its original condition, including repair and replacement of the wood flooring and trim throughout and restoration of the downstairs half-bathroom’s period tile and sink. In the kitchen, a framed 1920s advertisement ties in the house’s distinctive green roofing tiles and tan bricks–the Ohio companies that made both are still in business to this day. Each year, the owners venture to a friend’s tree farm near Bellefontaine, to select and cut down their Christmas tree, which they display in the front living room window. 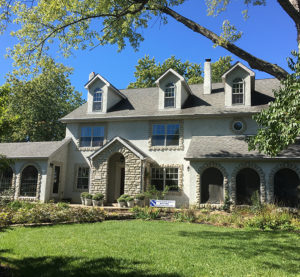 Constructed in 1910 as a summer home, and the original home had three bedrooms and one bathroom. On either side of the home were a sunroom and an open patio. The previous owner, Frank Monaco, Jr. was the son of former Marble Cliff Mayor, Frank Monaco, and he lived in the home for 28 years. When he lived there, Mr. Monaco, Jr. built a bedroom, half bathroom and laundry room. There was also a three tiered deck with a swimming pool/hot tub in the backyard.

In 2000, Dr. Deborah and Thomas York purchased the home. They gutted the existing home and replaced all wiring, plumbing and plaster walls. There is one remaining plaster arched ceiling in Tom’s office. In 2003, they completed the major addition that you see today. On the first level, they added a gourmet kitchen with custom built-in cabinets and granite countertops, a breakfast room with a large bay window, a half bath, a family room and a playroom for the children. On the second floor, they added 2 bedrooms, a master bedroom including a master bath with his and her walk-in closets. They converted the main bathroom into a Jack and Jill bathroom and added a main bath and laundry room. The third floor was added which is completely finished and runs the length of the house. For the last 12 years the neighborhood boys have played, soccer, hockey, and baseball up there, with a few broken teeth for Dr. York to fix. The exterior wood siding was replaced with stone and stucco. As part of the project, all single pane windows, woodwork and light fixtures were replaced.

One of our family traditions is to invite our neighbors on Cambridge Boulevard to a cookie decorating party each December. Another holiday tradition is to light luminaries every Christmas Eve. 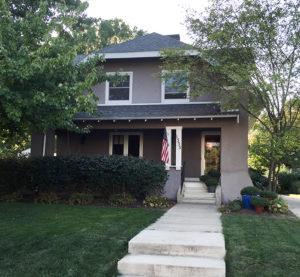 Originally constructed in 1922, this home has been extensively renovated over the years to include a spacious open kitchen, back porch, large master bedroom and master bathroom. Beautiful details of the home include soap stone kitchen countertops with a long island, hardwood floors, exposed brick throughout the home, and a mud room with high ceilings. The current owner moved into this home from ten houses down during the holiday season. A favorite Christmas memory of the family is literally walking the kitchen down the street ahead of the official move to have dinner in the new home on Christmas. 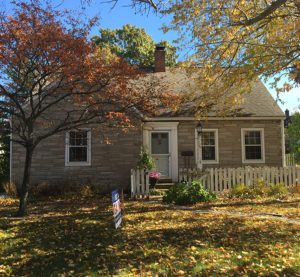 Built in 1939, this home is the newest on the block. The original owner of the home lived on the corner of First Avenue, and he built three homes for his children so they were always close by. Since moving in, the current owner has upgraded the kitchen, added a patio and pergola and has many ideas for the future that will make this their forever home.

The Broderick’s moved here in 1984 and raised two boys in this home. Each Christmas morning they take a photo of their sons on the steps, and no sneak peaks of what Santa brought until that photo has been taken! When visiting this home, be sure to look out for the many precious holiday items such as sterling silver Christmas ornaments the owner’s parents purchased for their grandchildren each year, as well as a tree in the den that have hand-made ornaments from the boys and very special gifted ornaments. Finally, be sure to look out for stockings displayed in the hall that were the owner’s and her siblings as a child.